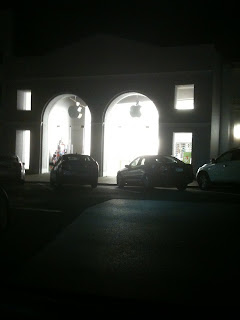 Growing up in Greenwich, CT, there were only two choices in town when going to the movies. The “Cinema” movie theater on Greenwich Ave. or the “Plaza”, down the hill on Railroad Ave. (Or your third option, you went to Stamford.) The Plaza was bigger and newer, and has since expanded into a three theater house. The Cinema was the smaller, older place. It eventually went to two screens, but it still had a more classic look and feel to it. And yes, perhaps it was a bit more rundown.

Well, I’m sad to say, the Cinema is gone.

I guess they could not keep up with all the new megaplexes and multiplexes that are popping up, as well as the countless other forms of entertainment out there, like HD televisions, home theater systems and Blu-Ray players.

They closed it down a while back. I wondered if they were just renovating it, but last night I drove by and discovered what had taken its place; an Apple Store. (See photo.)

It’s actually a very cool looking space, and I can totally understand why Apple would want a store on a road like Greenwich Ave. But I have to admit, it’s a little sad that the place where I stood in a huge line to see Star Wars with my dad in ’77 is now gone. I saw many pivotal movies there, from Animal House to Saving Private Ryan. I have great memories of my parents, friends and family there. It was a special place.

Let’s face it, this is nothing new in Greenwich, or anywhere else these days. No one who grew up in Greenwich can even recognize the Ave. anymore. There’s a Victoria’s Secret right next to the church. The old drug store with the soda fountain is now a J. Crew. Where Woolworth once stood, there’s a Sak’s Fifth Ave. And now there’s an Apple store in the old movie theater.

I know you can’t stand in the way of progress, and I realize that tons of people really enjoy their Macs and iPods. But somehow I don’t think an Apple store will resonate with the locals in quite the same way in which that old movie theater did.

It took me so long to catch up on last week’s Top Chef that I did not have a chance to write about it. Sorry. Let’s take a quick look at last week and then quickly cover this week.

So first of all, did you see Padma on 30 Rock? She does a pretty good job on Top Chef, but if she were being judged on her acting like she judges food, I’m afraid she’d be packing her knives and going home.

Last week was big for me. Talk about things getting hot in the kitchen… when they revealed Nigella Lawson as the guest judge, and put her and Padma in pajamas for breakfast in bed, I nearly passed out. All we needed was Giada De Laurentiis and we would have had the holy trinity of food hotties all in one hotel room.

Last week was significant for a couple of reasons. First, Robin finally came to the end of her miraculous run. She was nowhere near the best chef, she had no friends or allies, and yet through hard work and a lot of luck, she outlasted a lot of other chefs who where technically more skilled than her.

The other noteworthy things were Eli winning the Quickfire and then narrowly escaping elimination in the end. Jen dodged a bullet as well. She is clearly deflated and out of gas. Michael V. won the day, with a chicken wing, of all things. Funny, this week he makes a crack about the simple food that Kevin makes, and yet he wins with just that sort of dish.

On to this week; it’s the last week in Vegas before the head to Napa for the finale. There was a lot of French lingo being tossed around. If you want to know the proper names of a lot of the stuff from this episode, look it up on the Top Chef site. I just want to concentrate more on what happened.

We meet guest judge Gavin Kaysen, who was part of the US team at this big French food competition. As I mentioned, I can’t spell it and don’t have time to look it up. One thing I have learned from Top Chef is that I really know very little about the food scene in America or the world. Each time they introduce a famous chef, I only know them if I have seen them on TV. Up until now, the most famous chefs I knew of were Dave Thomas, Col. Sanders, Ronald McDonald, Orville Redenbacher and Roscoe, the genius who married chicken and waffles.

The Quickfire involved wrapping a protein in a protein in a protein. Jen mentioned a turducken, which is exactly what I thought of. Yum. But no one actually made one. During this event we learn that Kevin and Eli were friends before Top Chef. I am not sure if I knew that. They both make home-style food and are a counterbalance to the more sophisticated Voltaggio brothers. And somewhere in the middle is Jen.

Jen makes a wise decision not to make a turducken, because the calamari steak dish she made actually wins the contest. This was huge for her. She has been fading fast these last few weeks, and she really needed a boost like this. As a bonus, she gets 30 extra minutes to cook in the elimination challenge. And she admits, she needs it.

The chefs have to create a pretty sophisticated meal to the panel of judges. Included in the mix is Thomas Keller, touted as something like the greatest American chef. Once again, I have never heard of him. The Elimination Challenge is based on the The Bocuse d’Or competion. Here is an explanation from its chairman’s blog, Andrew Friedman.

The Bocuse d’Or (the name translates to “Golden Bocuse”) was founded by the iconic French chef Paul Bocuse in 1987 and it’s the world’s preeminent cooking competition—an international culinary showdown that pits two-person teams (a chef plus a commis, or assistant) from twenty-four nations against each other every other year in Lyon, France. The Bocuse d’Or assigns the proteins (meats and fish) and the candidates pick their own supporting ingredients. Each team cooks for five and a half hours, then presents two eye-popping old-school-style platters (one fish and one meat; each usually features a centerpiece and a virtual army of garnishes) that are paraded before an international jury, then plated and served to the individual judges.

So our chefs have to do a play on that. It’s tough. It requires skill, precision and flawless execution. Kevin decided to try a method he is not that familiar with; su vide, which is French for "under vacuum". I was alarmed by this choice. I like Kevin and don’t want to see him go home for sticking his neck out too far. But he survives, and is actually criticized a little bit for playing it safe. I thought that was interesting.

Bryan and Michael make very ambitious plates and both fall a bit short…. but Michael more than his brother. One judge finds a bone in his meal and his flavor and execution miss the mark. I really thought he was going home. Eli seems to put out a decent plate, but his lamb is undercooked. And he loses points for poor slicing technique, as does Jen.

Jen puts out a good plate visually, but her fish is sliced and cooked unevenly. As a matter of fact, the whole dish is uneven.

From the way the judges were talking, I really thought Mike V. would be going him. He seems to have misfired more than anyone. So I was surprised when Eli was eliminated. I don’t know… I think the fix might be in. Something tells me Bravo wanted the brothers to be in the finals together. Kind of like the networks would have preferred Yankees/Dodgers to Yankees/Phillies for rating purposes.
Either way, Eli is gone. Another guy who lasted longer than I expected. He laid low until the herd thinned out a bit and then emerged as a sort of dark horse.

Meanwhile Kevin is the big winner. Whether he wins Top Chef or not, this guys is all set. He wins 30 K and will be on the US team for the 2010 Bocuse d’Or. That’s like making the All Star team in cooking.

Next time, it’s on to Napa Valley. And judging from the promos, everyone will have a new hairdo.