Tonight as I was flipping around the stations and I stumbled upon The Rock, with Nicholas Cage and Sean Connery. I have seen it a million times, but you know what? I kept flipping back over and watching it. The Rock is one of those movies I will always watch if it’s on.

Some others? A Few Good Men and The Patriot, with Mel Gibson. If those movies are on, I may not sit from start to finish, but I always get sucked in and before you know it, I’ve seen it yet again. I just can’t help it.

Can anyone turn off A Few Good Men?
I want the truth. I can handle it.
I don’t think it can be done.

The Patriot always hooks me towards the beginning, when Mel Gibson ambushes the Red Coats in order to save Heath Ledger. “Aim small, miss small.” Once he goes nuts with that hatchet, I’m all done for the night.

Okay, I gotta go. I have get back to The Rock to catch the part when Nicholas Cage calls the guy “The Rocket Man” and launches him out of the lighthouse on a missile. I have to catch my favorite line in the movie, “He’s you. You’re the rocket man.”

Oh, What a Knight.

The Dark Knight lives up to the hype. Most people won’t need a review to convince them to see it, but if you do, then… go see it. Don’t miss this in the theater. Go see it in IMAX if you can. This movie is an event. It is huge piece of entertainment, but it’s complex, heavy and dark. It’s not a happy movie and it is not a kid’s movie. It is however, a GREAT movie.

Marvel Comics recently began to create a film universe that mirrors their comic book world. It’s a fantastic place where super powered beings exist along with extraordinary technology that make the impossible possible. Director Christopher Nolan does the opposite with his world of Batman. This is grounded in reality, with just enough fantasy to make it a superhero movie. This movie is more of a crime drama, kind of like Heat with a touch of James Bond thrown in for flavor and some No Country for Old Men for spice.

Heath Ledger is at the heart of the story of this film. His death casts a shadow on it, and it got the film’s legend growing before it was even released. His Joker is amazing. This version of the Joker will change the character forever, much like Frank Miller’s graphic novel, The Dark Knight Returns, reinvented the Batman character. He’s taken the character to a new place, and it’s somewhere in hell just south of Hannibal Lecter from The Silence of the Lambs and Anton Chigurh from No Country for Old Men. Give him the Oscar. He deserves it. Heath is gone, but this performance will live forever.

I don’t think you need to ever ask who the best actor to ever play The Joker was. Each actor was right for their time. I’ll just say the Ledger stands on the shoulders of Caesar Romero and Jack Nicholson and establishes a more terrifying and intelligent interpretation of the character. You will be riveted by his performance.

The writers are at the top of their game and the actors take the material and run. The entire cast is excellent, with Christian Bale handling the mantle of Batman and Bruce Wayne as well as ever. His character is layered, so you see all the sides of this man; the gruff masked avenger, the frivolous playboy facade and the private, driven Bruce Wayne. Bale definitely lives up to the reponsibilty of portaying the Dark Knight. Aaron Eckhart plays Harvey Dent, the D.A. that we all know will eventually become the villain Two Face. As Nolan did with The Scarecrow in Batman Begins, Two Face is slightly reinvented for this universe. He is the pivotal character in this movie.

One of the strengths of this movie is that it puts the characters in unpleasant situations and forces them to make very tough choices. And sometimes even the right choice turns out to be wrong. I have never seen a superhero move tackle serious issues like this, and handle them so deftly. Like Empire Strikes Back, this movie beats the hell out of its characters, and no one lives happily ever after. But as Harvey Dent says, “It’s always darkest before the dawn.”

The knocks on The Dark Knight? It is two and a half hours long. There might have been a few things they could have shortened, but I was not complaining. I don’t want to give anything away, so I’ll just say that people who have seen the movie have one or two minor complaints, but most people I know want to see it again, which is probably the best endorsement there is for a movie. I know I’ll be seeing it again. And again. And again.
Posted by Jack C. at 12:19 PM 2 comments: 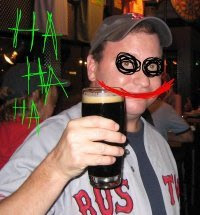 The Dark Knight comes out on Friday.
Do I look excited?
Posted by Jack C. at 8:30 PM No comments:

This week we got a peach my friends.

If you are at all familiar with my old 90210 recaps from back in the day, you know a few things about me… I love Jennie Garth with long hair, I thought attorney Matt Durning was a tool and most of all, my favorite person in the zip code of 90210 is Nat Bussichio, a.k.a. Joe E. Tata.

As the buzz builds on the new 90210, the good news just keeps pouring in. First hell froze over as we learned that Shannen Doherty is going to make an appearance on the new Niner. Now it has been reported that Nat will be in the pilot episode as the owner of the Peach Pit Diner. It’s not clear if he will have a recurring role. They’re crazy if he doesn’t.

How great would it be if he was featured in the opening credits, like back in the day? Oh, how I long to see his fatherly grin and the words “And Joe E. Tata as Nat” at the end of the credits on the new show. A guy can dream, can’t he?

I guess a cameo for now is good enough for me for now. I don’t think the show will last too long anyway, so if I can get one last Mega-Burger from my old pal Nat, I will savor every bite.

Seldom do you see a movie get so many rave reviews as this new Pixar animated movie Wall-E. At first glance I had no real desire to see it, but the overwhelming response to the movie convinced me to give it a shot. Glad I did… it is a good movie.

Let’s be clear, I don’t think it is the greatest movie ever made, nor do I think it’s even Pixar’s best movie. But, this movie should please just about anyone who watches it. Whether you want to take the kids to the movies, it’s a date or just a night out with friends, everyone should enjoy this movie from start to finish. One exception might be young boys, who may want more action in their movies.

I won’t give away much at all here. Wall-E is a robot that is sort of a cross between R2-D2, Johnny-Five from the Short Circuit movies and your trash compactor. He’s been alone for a long, long time on a now-deserted Earth until another robot arrives. It’s love at first sight, at least for Wall-E. As usual, Pixar is able to convey the most basic human emotions through animated objects. Longing, loneliness, fear, excitement and love as just a few examples. There’s plenty of humor that will connect with every age group and a little social commentary for the adults to boot. The special effects and animation are breathtaking. There are certain scenes where I was amazed that what I was watching was actually animated and not real.

The biggest knock I have on Wall-E is that I don’t feel a need to watch it again. For me, it’s kind of like the movie Cast Away with Tom Hanks. I saw it and enjoyed it, but I don’t need seconds. Meanwhile, a movie like The Incredibles I will stop and watch almost anytime I flick by it on TV. Ever baby sit a five year old? You know that you will end up seeing some of these Pixar movies over and over and over again. I have seen Toy Story 2 about a zillion times, and I still get a kick out of it. I don’t know if Wall-E could stand up to that many viewings for me or a kid. There’s very little dialog and it’s just not as funny as other some other Pixar movies.

Bottom Line: If you want to see a good movie, Wall-E is a safe bet. No matter how old you are. Some of you saps will absolutely love this movie, others will simply have an enjoyable experience at the movies.
Posted by Jack C. at 10:07 PM No comments:

We hoped it would happen, but we never really expected it to. But now it just might happen.

Faith. Sometimes you just have to have faith. And sometimes faith is rewarded. Have you heard the news? Shannen Doherty might be returning to Beverly Hills on this new 90210.

I’d say I’m speechless, but I am writing a blog about it, so that’s not really true.

Brenda is back, baby. According to the article, (see link below) Tori may be out and Shannen is in. Shannen Doherty is the black pepper on the mashed potatoes of 90210. Sure, you’ll still eat mashed potatoes with salt, butter or gravy, but you like them better with some fresh ground pepper, and you really notice a difference when it’s missing. There’s no fire, no spice. No Brenda Walsh.

I know the new 90210 will probably be a train wreck, but if Brenda and Kelly are driving that locomotive, save me a seat in the bar car.

Now, if only we can get a Charmed reunion going with original three sisters, I’ll really be excited. (Ah, we can include Rose McGowan too. Who am I kidding?)