The Monster Men go in search of The White Lady of Union Cemetery! Just in time for the release of Hunter Shea's new ghostly novel, Sinister Entity, we pay a visit to the haunted hub of the Nutmeg State. 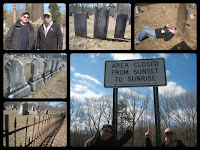 Union Cemetery in Easton is considered one of the most active paranormal locations in the Connecticut. It’s also home to one of the most famous ghosts in New England, the legendary White Lady ghost, who is said to roam the grounds and the surrounding roads including Route 59 and 111. There are also reports of mysterious red eyes being spotted by visitors and passersby.

The cemetery was made famous by Ed and Lorianne Warren, Connecticut's most well-known ghost hunters. They claim to actually have a video of the White Lady, but you have to pay to attend on of their events to see it. Now that Ed has passed away and Lorianne is consulting on shows like Paranormal State, I'm not sure if you can still get a chance to see the video.

On this episode of the Monster Men video podcast, Hunter and I, along with our buddy Anthony, visit this haunted hotspot.  We explore the cemetery, share a few stories and even try a some EVP sessions to see if we could pick up a the voice of a spirit or two. I also share a photo I took there around 1997 or 1998 that reveals a ghostly image in a window of the house by the cemetery.

I have to say, I did not expect to get anything from the digital recordings we made, and when my partner informed me that we had caught an interesting sound on the tape after one of our questions directed specifically to the White Lady, I was shocked. Could it be an EVP with the voice of the most infamous ghost in Connecticut? Check it out and let me know what you think.

And a quick word of advice to our fellow ghost hunters and legend trippers, don’t go to the Union Cemetery at night. It’s illegal and you will be arrested or fined. If you do visit, during the day, please respect the property and the graves.

The Monster Men video podcast is a lighthearted chat about dark matters. We talk about all things horror and paranormal with our own brand of graveyard humor. Horror movie and book reviews, paranormal TV, ghost stories, UFOs, urban legends and more.

Find more episodes of Monster Men here on my blog, on our YouTube channel: Monstermen13 or at horror author Hunter Shea's web site. You can also join us on our Facebook page.
Posted by Jack C. at 2:31 PM No comments: