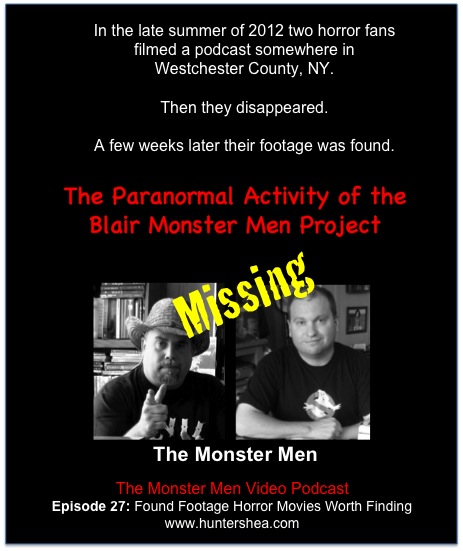 To see the found footage that may pertain to this case, click the "Missing" poster above.

A new episode of the Monster Men video podcast is out. This time out we review Found Footage Horror Movies. You know, those movies supposedly filmed by one of the characters, complete with a shaky camera and people who continue to film despite the fact that they are being attacked by a ghost, monster or other supernatural entity. Typically there are no survivors and all that's left is what they filmed. The Blair Witch Project and the Paranormal Activity series are two good examples of this kind of movie.

Join the Monster Men as we discuss some of the best, and worst, found footage movies. The films include the upcoming "Paranormal Activity 4", "Megan is Missing", "Troll Hunter" and the REC films, (REC) and (REC)2. Also, in our Comic Book Update segment, we review the Kolchak: The Night Stalker comic book series.


Find more episodes of Monster Men here or on our on our YouTube channel: Monstermen13 or at http://huntershea.com/monster-men-podcasts/ and you can also join us on Facebook at www.facebook.com/monstermen13.
Posted by Jack C. at 2:14 PM No comments:

The Bermuda Triangle is every paranormal fan's favorite body of water. Often referred to as The Devil's Triangle, it has seen hundreds of ships and planes mysteriously disappear throughout the years. Join the Monster Men as we take a glass bottom boat cruise into The Triangle and see what lurks beneath the waves. The answer may be funnier than you'd think.

We also discuss the 1975 cult classic movie "Satan's Triangle" with Doug McClure and Kim Novak. Remember that one?

Plus we review "The Missing", Sarah Langan's terrific horror novel along with the horror comic book "Whispers".

Get on board, your supernatural ship is about to set sail.

Click here to get LOST IN THE BERMUDA TRIANGLE 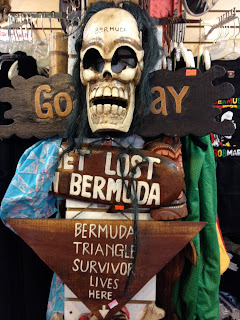