2014 was an interesting year for horror movies. A lot of the mainstream offerings, like Dracula Untold, Annabelle and Deliver Us From Evil simply did not grab me with their trailers and I skipped them. I have to admit, I also missed a few movies that I have heard good things about, like Honeymoon, Dead Snow 2, Exists and As Above, So Below. They are on my "to-do" list. However, I did see enough good horror movies to make this list… even if not all of them may be considered “horror” to a purist. I don’t care. This is my list and these movies are really good and worth watching.

Read this then check out my Monster Men partner Hunter Shea's list over at his blog. 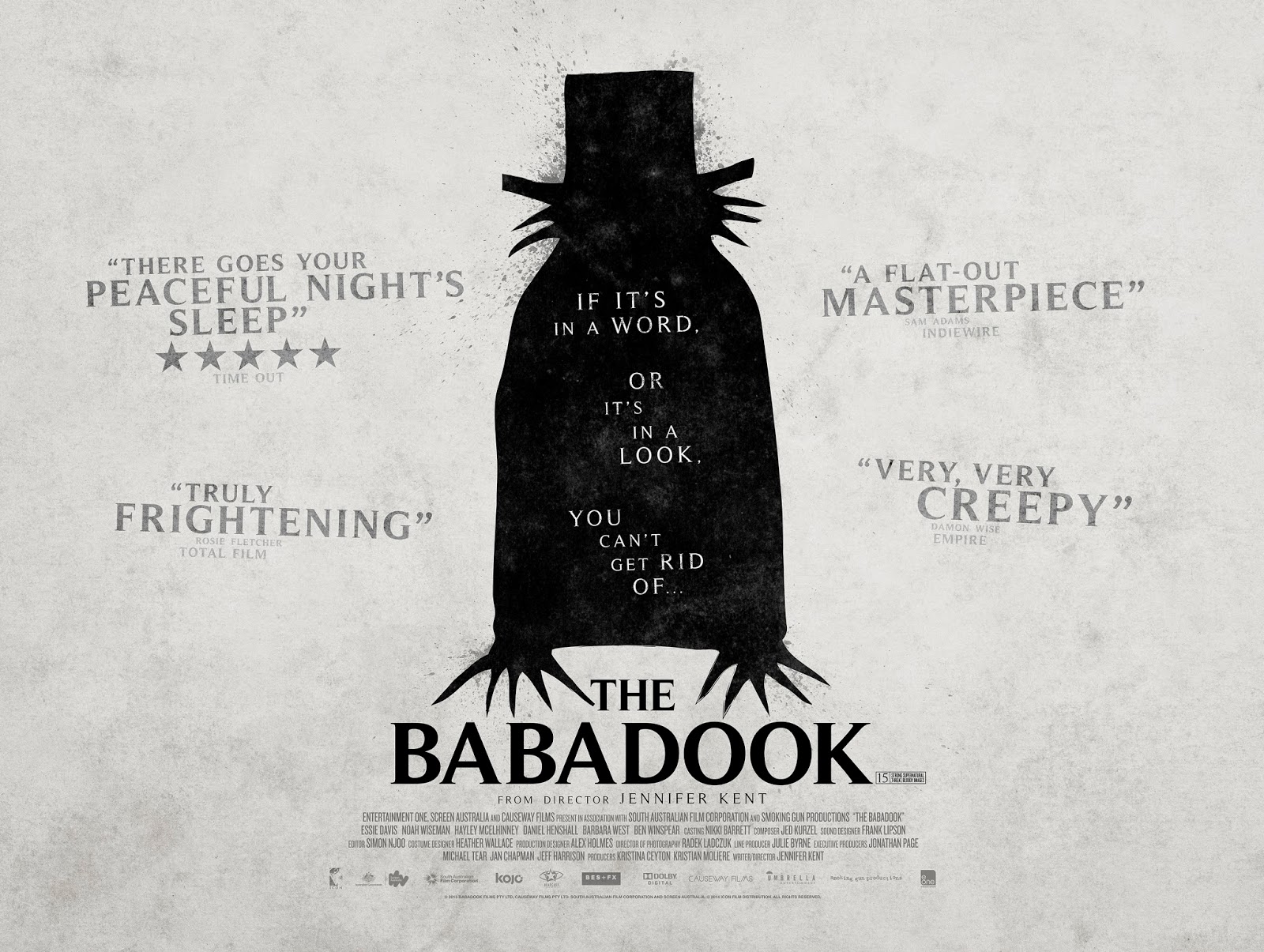 1. The Babadook
The boogieman is here and your mother may not be able to protect you. This movie is getting rave reviews and it deserves them. This well written, well-acted film draws its scares from both the terrifying title character and the real life fears of a single mother and her troubled child. It is a very intelligent and artistic horror movie. To be honest, The Babadook is not for everyone. If you are into CG heavy movies, jump scares and torture/gore fests, this might not be for you. It deals with depression, despair and isolation… as well as the monster hiding in your closet.  Not just a scary movie, The Babadook is a horror film.

2. Nightcrawler
This movie may not show up as a horror movie on a lot of lists, but it is showing up on a lot of Oscar prediction lists and it deals with some pretty frightening subject matter. A socially awkward loser finds his groove as a crime scene videographer with a knack for getting to the scene first and getting the money shot… no matter what it takes. It’s brutal, edgy and disturbing. Jake Gyllenhaal’s transformative performance as Louis Bloom is on par with Heath Ledger’s Joker. It could win him an Academy Award. He’s clever, dangerous, manipulative and creepy as hell. Not technically a horror movie, but I’d guess that horror fans will really like this film.

4. Shock Value
I had heard a lot good things about this movie and I am glad I decided to check it out. The premise is that a horror movie director decides to blackmail a real serial in order to get him to play a serial killer in his low budget slasher film. This is a horror / dark comedy that derives a lot of its laughs from the conversations and reactions of the people in the film, rather than from gags. It’s a great movie that kicks into high gear in the third act. Stellar performances and great writing really take this movie to the next level. Don’t miss this one.

5. Housebound
What happens when a troubled teen is placed under house arrest in her mother’s country home, when that house just may be haunted? Shawn of the Dead meets The Conjuring comes to mind. Housebound is an excellent horror comedy movie from New Zealand that is also an impressive murder mystery. It’s an extremely clever film that has moments of genuine suspense and horror along with plenty of laughs. This movie keeps you guessing, laughing and at the edge of your seat the whole time.

6. Life After Beth
Life After Beth, the zombie movie with Aubrey Plaza from Parks and Recreation, is a very polarizing film. I’ve seen this movie on many best and worst horror film lists. As you can tell, I enjoyed it. More of a fresh, new twist on the zombie genre than a traditional horror movie, this film boasts an all-star cast and a twisted sense of humor. It’s not a flat out comedy, but it’s a very funny movie, even though many of the characters are playing it totally straight.  I happen to like Aubrey Plaza and I think she knocks it out of the park. I also think you’ll be astonished by the parade of familiar faces that grace this movie including Dane DeHaan, Molly Shannon, Matthew Gray Gubler, John C. Reilly and many more. A much better Zom-Rom-Com than Warm Bodies, in my opinion.

7. Afflicted
Just like I enjoyed Life After Beth because it was a fresh take on zombies and I can say the same for Afflicted for vampires, as well as the found footage genre. Afflicted follows two friends on a trip across Europe and the aftermath of a strange encounter with a lovely, and toothy, young lady. The movie was actually able to do something original with a vampire story and also make a found footage movie that did not induce groans from its ridiculousness. It actually had a good third act and ending... that’s pretty rare for a found footage movie.

Again, not a classic horror movie, but a tremendous genre piece with plenty of horror elements. Chris Evans was in two of my favorite movies this year, as was Tilda Swinton. This one takes place in a world covered by deadly cold and snow thanks to a failed man-made global warming solution. The survivors live in a special train that circles the globe, with the wealthy and privileged in the front and the poor crowded in the rear. Don’t miss Snowpiercer, it’s a sci-fi movie with traces of horror throughout it. A terrific action movie with amazing writing and a great story.

9. Tusk
Kevin Smith’s walrus themed horror movie left me speechless. Imagine Clerks meets The Human Centipede. Now add a walrus, Canada and a podcaster. I am still not sure what I think of Tusk except that I think you need to see it. It is ridiculous, funny, disturbing and certainly original. And memorable. I’m not sure if it’s a “good” movie or not, but it’s a must see, just so you can talk about it. It seems destined to be a cult classic.

10. Only Lovers Left Alive
This is another movie that is more of a new spin on vampires than a bona fide horror movie. Still, makes my list because of its stellar cast and originality. Tom Hiddleston and Tilda Swinton play two vampires/lovers who must deal with the burden and boredom of immortality along with an out of control sister who complicates and threatens everything. Have patience. The movie is more of a slow burn, but it is an interesting and entertaining look at the long life of a vampire in an ever-changing world.

11. The Sacrament
It was a good year for found footage movies. The Sacrament was basically The Blair Witch Project in Jonestown. We are taken to a remote village by a documentary film crew where a community lives under the guidance of the Father, a leader clearly inspired by cults like Jim Jones and Heaven’s Gate. Naturally, the film crew’s visit happens to occur at a very inopportune time and we get to watch as all hell breaks loose. Ti West continues to produce quality horror films and is really making a name for himself in the genre.

12. The Taking of Deborah Logan
Here’s another found footage movie that does something new and does it pretty well. This time the focus is on an Alzheimer’s Patient who is possessed. This a pretty cool approach to a possession movie and Jill Larson, who plays the title character, turns in a very courageous performance. It’s a fun movie and a perfect Netflix pick.

13. All Cheerleaders Die
This is just a fun and silly horror movie that feels like it could have been made in the 80’s. Don’t think too much, just crack open a beer and enjoy the show.

Honorable Mentions:
A few non-horror movies to check out.
First of all Guardians of the Galaxy was my favorite movie of the year. Action packed, spectacular and hilarious. The most fun I had at the movies all year and the best soundtrack by far. I AM GROOT!

Captain America: The Winter Solider. Man, Marvel was on a roll this year. This movie rocked and it flipped the Marvel universe on its head. The inclusion of Black Widow and the introduction of the Falcon only helped elevate this movie. Hail Hydra!

Birdman: The trailer is very deceiving, but this movie is an example of great film making and is filled with top notch performances and incredible cinematography. Michael Keaton is amazing.

X-Men: Days of Future Past. A movie that attempts to fix the mistakes of the prior X-Men films. Ignore the continuity problems and enjoy one of the best X-Men films of them all. The Quicksilver scene alone is worth the price of admission.