A Real Haunted House and Some Good Horror Movie Talk

I am very excited about this new Monster Men episode! Welcome to Spirits & Stories, where we discuss things that go bump in the night with our friends over drinks. (Spirits, get it?)

We've always described this show as two buddies talking horror and the paranormal and encouraged folks to pull up a "virtual" seat. Thanks to our Halloween event this past October, we were able to make that happen for real.

In this first segment you'll meet Fred Powell and hear about his time living in a haunted house. Then we talk horror movies with Jerry Mulcahy, the man behind the Monster Men logo.

Keep an eye out for more installments of Spirits & Stories and let me know what you think. 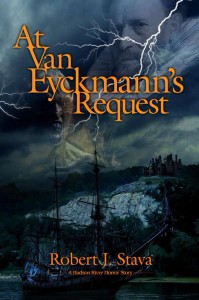 One of my favorite things about doing the Monster Men show is that I have met a lot of great people, both online and in person. This is a perfect example of that...

This latest episode of Monster Men was filmed at our Halloween event in October 2012 at the Wicked Wolf Tavern in White Plains, NY.  In this one, you'll meet horror author Robert Stava. He tells us about his great new book "At Van Eyckmann's Request" and introduces us the mysterious town of Wyvern Falls.

Could Robert do for the Hudson Valley what Stephen King did for Maine? I don't know, but he sure is off to a good start.

The Secret To Everything Radio Interview

On October 24, 2012, the Monster Men were honored to be guests on the Halloween episode of The Secret to Everything BlogTalk Radio Show with with Dr. Kimberly McGeorge.

The show is now available on demand. Check it out. We had a blast and I think you'll enjoy the conversation. We are on for about the entire first hour of the show.

Listen to internet radio with KimberlyMcGeorge on Blog Talk Radio
Posted by Jack C. at 7:37 PM No comments:

MONSTER MEN IN SPACE:
Join us as we discuss UFOs and aliens. Learn about Jackie Gleason's connection to extraterrestrials and hear about Hunter Shea's own close encounter. We also cover movies and TV shows that deal with aliens & space like Alien, Event Horizon and even The Brady Bunch.

First of all, Happy Halloween!

Okay, let’s wrap up the Halloween Fright Flick Frenzy with a look at what I watched in the home stretch of Terrortober.

Along with horror movies, I watched a lot of spooky TV shows like AMERICAN HORROR STORY, the Halloween episode of IT’S ALWAYS SUNNY IN PHILADELPHIA and a couple of SIMPSONS Tree House of Horror episodes. What a blast. I am sad to see the month end.


SALEM'S LOT (1979). On Halloween I watched one of my favorites vampire movies. This movie did for bedroom windows what Jaws did to the beach. "Open the window. He commands it.” Love those vampire eyes. Sure, it might be a bit dated, but this is still a classic. Evil vamps that fear crosses; that’s how you do a vampire movie... and a Stephen Kind adaptation.

HALLOWEEN (1978): The original Michael Myers in the theater. Can't think of a better way to spend Halloween eve. Amazing. The atmosphere, suspense, scares and that music!!! A true classic. I think the scenes of The Shape stalking Laurie during the day may be the creepiest part of this movie.

HOCUS POCUS (1993): If you don't like HOCUS POCUS, then hand over your Halloween card now. Lot's of fun and a great version of I Put a Spell On You.

YOUNG FRANKENSTEIN (1974): They showed one of my all-time favorites in IMAX. Incredible! Seeing it with a crowd was a blast and I noticed things I’ve never seen before. And Teri Garr on a giant screen was amazing.

RISE OF THE ZOMBIES (2012) A better-than-usual, cheesy SyFy flick w/ all-star cast of Levar Burton, Mariel Hemingway & Danny Trejo.  If you like these kind of movies, I am sure SyFy will show it a hundred more times.

REAL FEAR: THE TRUTH BEHIND THE MOVIES (2012): A fun little documentary, to see what the real story behind some horror movies might be. Good Terrortober viewing.

MOCKINGBIRD LANE (2012): NBC’s lame attempt to reboot The Munsters. Not zany enough for me.  Did not laugh once. Herman needs his inadvertent super strength and Grandpa needs to be wacky, not sinister. But Lilly is lovely.  I think a reboot of The Munsters would work better as a cartoon, like The Simpsons or Family Guy.

THE MIST (2007): Good flick that becomes great thanks to the best "holy crap" ending ever. And a few Walking Dead pals as a bonus.  Another one of the few good Stephen King movie adaptations.

Well, now that Halloween has come and gone, it’s time to look to the skies. Stay tuned this week for a new episode of Monster Men that is truly out of this world. 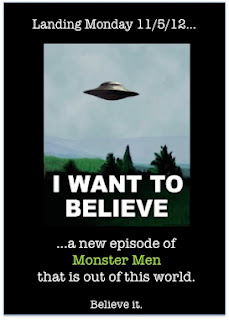