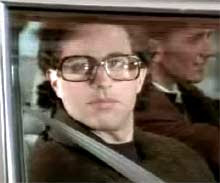 We begin in the fictional country of Kamistan, where the fictional participants in the attempted coup d'état are being rounded up by Hassan’s men. This uprising must be dealt with swiftly and severely in order to send the right message and keep Hassan’s power intact. It’s the only language these people understand. What this really means is that most of these people will be executed. This latest development gives Madame President a bad case of agida*, because she knows the global community “frowns upon” a little thing called human rights violations. So this could be a bit of a speed bump in the peace talks.

But Hassan Chop has other domestic problems on his mind. After ending the relationship with his mistress, he tries to reconcile with his wife, but she wants nothing to do with him. So now he’s got nothing. Meanwhile, his evil brother has plenty. When we catch up with Farthead he’s still working out the details of the transaction with Sergei, the Russian uranium salesman. Farthead needs about five hours to get the funds transferred from his account, so Sergei offers him two hot, Russian hookers to kill the time. I’ll tell you what, if I was Farthead, and that’s how I had to pass the time, I would pretend to get a text message and tell Sergei that the funds will actually take more like ten hours to arrive.

Back at CTU, Dana finishes up the background story for Jack & Renee. Chloe checks in with her for an update when Dana gets a call on her cell. But it’s not a call for Dana, its Kevin calling for Jenny. Nice to see CTU agents taking personal calls in the middle of a crisis. I wonder if they are updating their Facebook pages, sending tweets and winking to people on Match.com too.

Kevin reveals that Jenny is an ex-con and accessory to murder. So I guess about the only thing CTU agents don’t do on company time is thorough background checks on potential employees. Afraid of losing her job and her fiancé, Dana asks Arlo to cover for her and sneaks out. For four episodes, all we heard was how short-handed CTU is because of budget cuts, but Arlo has enough time to cover for Dana. But Arlo is sweet on Dana, so he’ll do whatever it takes. (He’d be better off on Match.com.)

When Dana gets home, she finds Kevin watching a football game with some shady friend of his. It made me think; this must mean that this is a Sunday, Monday or Thursday night, since those are the only nights the NFL is on. Except for Saturday games during the playoffs… but it’s too warm to be January. And it can’t be January, because then it would be too cold to fake L.A. for New York like they are doing. But I digress…

Meanwhile, Joseph, the son of the uranium salesman, disobeys his father and takes his brother to a doctor in Mt. Vernon, where he forces the doctor to cooperate by threatening his family. I was a bit distracted at this point because once they mentioned Mt. Vernon, all I could think about was The Bayou restaurant on Gramatan Ave. in Mt. Vernon. One of my favorite places… great food, great bands, decorated with an Elvis bust and KISS dolls, an endless selection of hot sauces and VooDoo Wings that make my mouth water just thinking about them. (Oh God, who’s up for The Bayou the weekend? Email me.)

Now that we got all that other side-character crap out of the way, we can focus on the real meat of the story, Jack and Renee. It turns out I was wrong last week about two things; Zia’s name is actually spelt Ziya and Renee did not cut off his hand, just his thumb. This would be traumatic for anyone, but it’s especially bad for Ziya. You see, since coming to the U.S. he has become a big fan of the American TV icon, The Fonz. Thanks to Crazy Renee, he can never go out for Halloween as his hero. No matter though, his Happy Days are just about over anyway. Jack storms into the store and accuses Renee of being unstable, but that’s a little like the Burger King telling Ronald McDonald that his food is fattening. So instead of calling off the operation, they cauterize Ziya’s wound and head off for a meeting with Vlad. Renee and Jack communicate with a magic earplug that enables then to talk and hear, but it’s not visibly noticeable to anyone else. (This would certainly come in handy for Ziya, who will be requiring a hands-free phone from now on.)

Ziya takes Renee to Vlad’s hideout, and on the ride over, Chloe finds out that Vlad and Renee have a rough past that involves a lot of physical abuse and probably some rape. This got me thinking that maybe this season will turn into a rape revenge story, kind of like the Dirty Harry movie “Sudden Impact” or the all-time classic, “I Spit on Your Grave.”

Vlad is suspicious of Renee and quizzes her on her New Mexico back-story. Jack pulls a Cyrano de Bergerac and tells Renee what to say through the magic earplug. She maintains her ice cold poker face even when she has to wait for Chloe to funnel the answers to Jack. Renee gets all the facts straight, but Vlad still smells a rat and throws Ziya and Renee in the trunk of his car. Ziya, is probably thrilled to be in such close proximity to a hottie like Renee, but we’ll never know it because he can’t give us a thumbs-up.

Jack, fearing for Renee’s life, follows the car and instructs CTU to intercept and call off the mission. When he realizes he’s following a decoy, he unleashes a stream of “DAMMITS” so long, that if laid out in a row, would stretch all the way to Kamistan and back.

Once out of the truck, Renee and Ziya are held at gunpoint on their knees. Jack hears a gunshot and sh*#s a brick, but is relieved when he hears it’s only Ziya who is dead. Poor Ziya… but on the bright side, he doesn’t have to worry about that thumb anymore.

Vlad gives Renee one more chance to tell him the truth. She tells him that the truth is she has nothing to live for except this deal and encourages him to pull the trigger. Meanwhile, Jack continues to spout bricks. Vlad is moved by her words and decides to buy her story. Jack is relieved, but knows that there is more to Renee’s death wish than just the cover story.

Next week, it could be curtains for Renee when she goes dark. Shower curtains, that is. And Jack goes undercover using the Seinfeld glasses.

---
Questions? Comments? Feedback? Want to get on the email alert list? Drop me a line at jack@backinjack.com or post a comment below.
Posted by Jack C. at 12:22 AM

This could be one of my favorite recaps ever! And I think it was even more entertaining than last nights episode!
Crissey